Tibor Nagy challenges Ambazonians to up their…

“AFRICA DOES NOT NEED ANOTHER SOUTH SUDAN”

‘A New Africa has to be Born’…

Nigeria And Cameroon In War Of Words…

The voice of Ambazonia

Muslims around the world are marking the entry into an Islamic New Year as September 11, 2018 was officially declared the first day (1st Muharram) of the year 1440 Hijri. Muharram is the first month of the Islamic calendar.

According to the calendar used across most of the Arab world, Muslims have entered the year 1440 Hijri. It is referred to as the Hijri Calendar because it began with the Hijra, or hegira, i.e. the Prophet Muhammad’s migration from Mecca to Medina (in present day Saudi Arabia).

Muhammad and a number of Muslims at the time migrated to Medina due to persecution by the disbelievers. The first Muslim state was established in Medina till he returned to Makkah after a conquest years later.

The occasion comes with very little celebration as compared to January 1st in the case of the Gregorian calendar. Except for Muslim dominant nations, it is a normal day across most secular countries.

In parts of northern Nigeria for instance, state governments have declared the day a holiday to allow residents observe the day as such.

The Saudi Press Agency, SPA, and the Islamic Society of North America, ISNA, all declared September 11 as the official date for the start of the New year. SPAsaid in an article: “The Supreme Court has announced that tomorrow, Tuesday is the first day of Muharram,1440 H corresponding to 11th September 2018.

“It said in its statement that the crescent of the month of c 1440 H was not sighted on Sunday evening 29/12/1439 H, there for the Supreme Court decided that Monday 30/12/1439H shall be the completion of the month of Dhu-AlHijjah and Tuesday 1/1/1440H is the first day of Muharram according to the Umm Al-Qura calendar.”

As per Islamic traditions, Muslims have two main celebrations annually in the mould of Eid-ul-Fitr (Post Ramadan feast) and Eid-ul-Adha (feast of sacrifice). 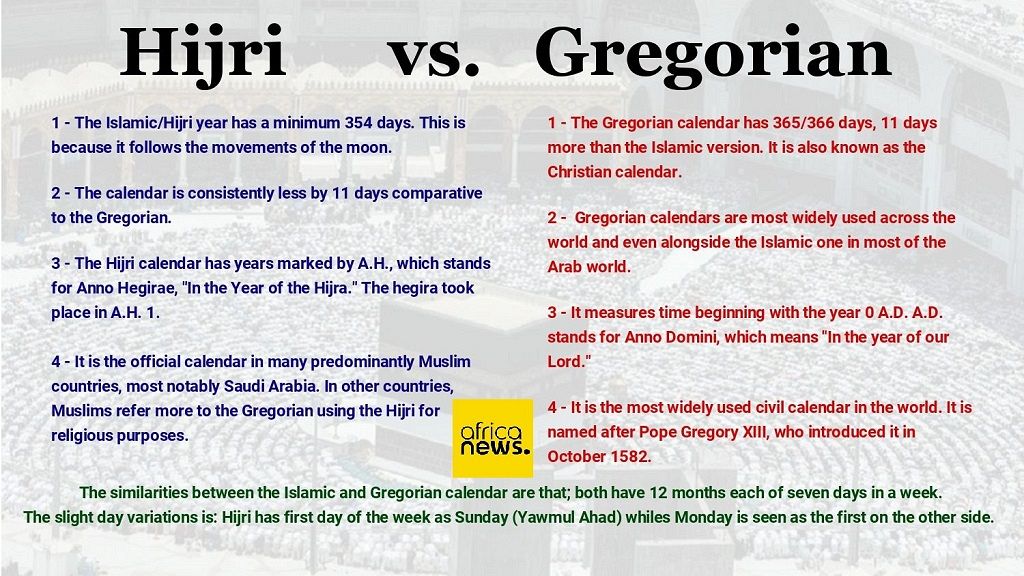 Difference between Hijri and Gregorian calendars

Gregorian calendars, which are most widely used across the world and even alongside the Islamic one in most of the Arab world, on the other hand measure time beginning with the year 0 A.D.

A.D. stands for Anno Domini, which means “In the year of our Lord.” The Hijri Calendar has years marked by A.H., which stands for Anno Hegirae, “In the Year of the Hijra.” The hegira took place in A.H. 1.

The similarities between the Islamic and Gregorian calendar are that; both have 12 months each of seven days in a week. The slight day variations are that the first day of the week is Sunday (Yawmul Ahad) whiles Monday is seen as the first on the other side.

This website uses cookies to improve your experience. We'll assume you're ok with this, but you can opt-out if you wish. Accept Read More