Why are young Southern Cameroonian men taking up arms to fight Cameroon’s military? - The Voice Of Ambazonia

Why are young Southern Cameroonian men taking up arms to fight Cameroon’s military?

Before Anglophone teachers and lawyers went on strike, before several mass protests in major English-speaking towns, before the Cameroonian government started arresting and imprisoning protesters,  Nti was a farmer and waterside worker helping boat drivers offload their bags of cocoa and other goods.

After several attempt to get into the police, army and customs, Nti felt he had no chance of landing a job in his village near the city of Mamfé in Cameroon’s southwest region. His elder brother who had a degree also had difficulties getting a job.

Many young men in the English-speaking regions like Nti have similar stories of struggle and frustration. Today, both 22-year-old Nti and his brother have joined thousands of other separatists fighters caught up in a deadly wave of violence with government security forces since November last year.

As of May this year, the crisis has displaced at least 180, 000 people, including more than 21,000 who fled to Nigeria. Nigerian emergency officials and NGOs estimate that the number might be as high as 50, 000.

What started as a strike by lawyers and teachers in late 2016 to protest the use of French in courts and schools in Cameroon’s English-speaking northwest and south-west regions has morphed into a vicious crisis.  At least one person was shot dead on the first day of the protests in November 2016. Then  on 1 October, 2017 when the new state of Ambazonia was declared by separatists, Amnesty International say at least 17 people were killed during demonstrations.  And in November 2016, security forces arrested some 100 people in the city of Bamenda and many people treated with bullet wounds in hospital in the city of Bamenda, capital of the northwest region.

“We only started peaceful demonstrations, but the government started jailing us every day and becoming violent,” says Michael, a fighter with one of the rebel groups.

“This is something that could be settled with dialogue, yet the troops chose to use force against us. It was never a gateway for peace because boys will raise to fight back.”

Michael’s younger brother was arrested and is still in jail following the declaration of the independence for the new state called “Ambazonia” by separatist in October last year. 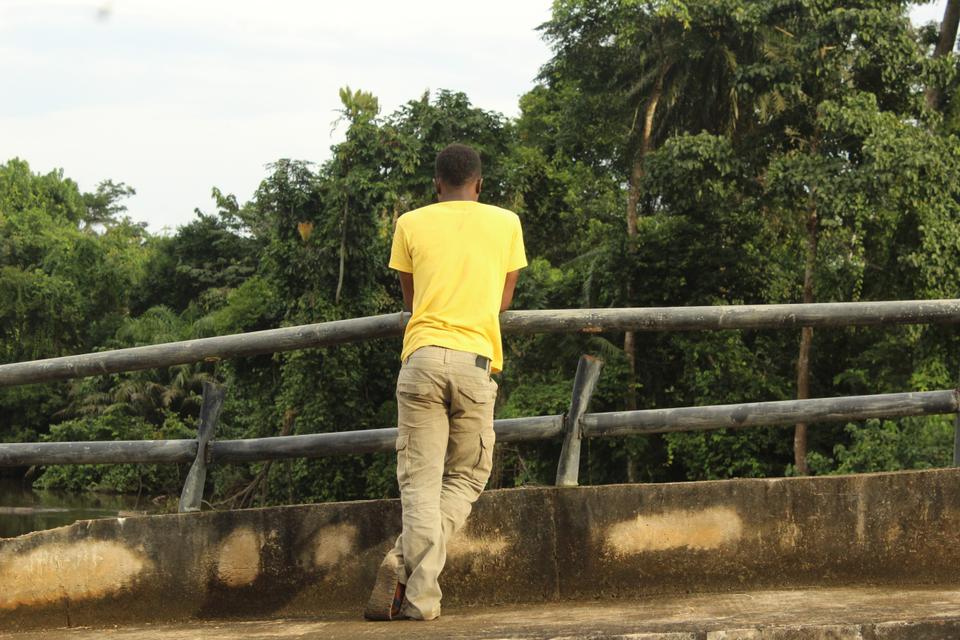 Cameroon has a population of about 24 million people, some 20 percent are Anglophones. The country is divided into ten administrative, semi-autonomous regions of which two are predominantly English-speaking regions.  Majority of the population in the Anglophone regions often complain of lack of job opportunities, economic development and the predominance of French and French-speaking  people in official documents, and public offices.

The journey towards an insurgency

Though long-standing grievances resulting from a deep-seated feeling of discrimination have often pervaded the Anglophone community as far back as the 1980s, calls for either greater autonomy or secession have grown louder and more ferocious since late 2016.

The roots of the conflict run deeper.

Three years after British and French troops sent Germans away from Cameroon in 1919, the country's 80 percent was administered by the French and 20 percent by the British. The British administrative zones were further divided into Northern and Southern Cameroons.

But the lure of federalism was stifled by a constitutional referendum that, in 1972, saw Cameroon change to a unitary state to become the United Republic of Cameroon. This disillusionment was further compounded by current president Paul Biya, who, after coming into power in 1982, changed the name of the country to the Republic of Cameroon. Mr Biya, who is now 85, announced that he will run for re-election next month. Currently, only three out of 33 Cameroonian generals and six of the 63-person cabinet members are Anglophones.

Nti, the separatist guerilla,  spends most of his time in camps tucked away in the forest, while trekking for several days and clambering mountains as his group takes on the army. When he joined the separatist fighters in October last year, his parents protested and his mother would occasionally quarrel and harangue him whenever he came home for a short visit. But now, he says, they are used to his being fighter and only pray for him.

Nti belongs to the Ambazonia Defence Forces, which is fighting government-backed security forces alongside a slew of other self-defense groups such as Ambazonia Restoration Army, The Tigers of Ambazonia, and Southern Cameroons Defense Forces, most of whom are under the aegis of the Ambazonia Self-Defence Council.

“What do you want us to do?” he asks, adding: “We cannot sit back and watch the army kill our families and relatives and burn down our villages without reacting; so I joined the struggle out of annoyance.” Nti’s eyes rolls around almost like a predator in search of prey. He takes several seconds and sometimes minutes to reflect before he talks.

After using satellite imagery to evaluate 131 villages, Human Rights Watch said in a report in June that “several hundred homes showing signs of destruction consistent with arson in 20 villages of the South-West region alone.” The report further maintained that testimonies from villagers showed that security officials were responsible for the burnings. 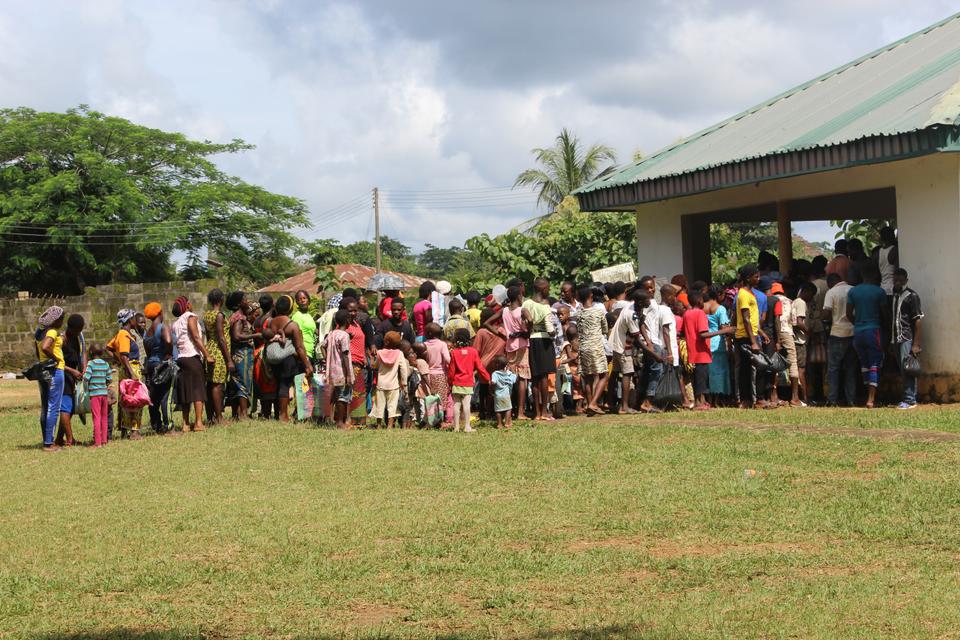 At one of the banks of several rivers flowing through the border area in Nigeria’s southeast, John bantered with his friends. Their talk segued from was a farmer and owner of a roadside petrol stall before the crisis uprooted people from their villages and turned boisterous towns into ghost towns. He said he “joined the struggle” because Cameroon is “designed to favour French people over us.”

John, 24, said he tried taking entrance examinations (widely known as concours) into the police. He says he spent more than $400 in getting required documents, buying physical stamps, and paying officials who promised to help him in the north-western Cameroon city of Bamenda.

But, in the end, nothing came of it.

“I watched as all the money I laboured to save from my hustle went down in vain,” he says, his eyes welling up with tears. “Then when the crisis started, I just knew I was going to join the fighters because we were getting frustrated and cheated by the [Francophone] every day.”

Most fighters TRT World interviewed often call the battle with Cameroonian soldiers a struggle, so it is common to hear them say “I joined the struggle”.

“It is a struggle to better our lives and free our land from the French Cameroon who have been marginalizing us for many decades,” 26-years-old Michael, who is with the Ambazonia Defence Forces, explains. “When somebody comes to your house, kills your mum, kills your dad, kills your sister, what will you do?”

Before joining the ranks of fighters, Michael, who has a General Certificate of Education Advanced Level, has written at least ten concours for the army, police, gendarme, the Battalion d'Intervention Rapide (an elite combat unit of the Cameroonian army), customs, health personnel training institution, and more.

“When you put all these things together you can see why it is easy to become frustrated,” he  says.

Both sides have been accused of grave human rights violations. In June, Amnesty International released a report which found that security forces carried out arbitrary arrests, torture, unlawful killings, and destruction of property, including burning down villages in Anglophone regions.

The report, which is based on interviews with over 150 victims and eye-witnesses as well as satellite images, documents how armed separatists killed security forces and attacked some 42 schools between February 2017 and May 2018 for not participating in a boycott of schools in the Anglophone regions. Rebel fighters have also been accused of kidnapping and attacking civilians.

“Their heavy-handed response will do nothing to calm the violence - in fact it is likely to further alienate Anglophone communities and fuel further unrest,” Samira Daoud, Amnesty International Deputy Director for West and Central Africa, says of the military crackdown.

Though 22, Nti’s furrowed forehead and calloused hands tell of his sojourn in the forest, sleeping in tarpaulin-covered camps with a cook and TV to help them keep abreast of happenings around them. After recruitment, fresh fighters received rapid series of trainings in kickboxing, handling guns and explosives, among others.

Nti uses a dane gun, and he says most fighter use this old-fashioned rifled musket and some use handguns and locally-manufactured hunting rifles.

“We all have Odeshi [charm],” Nti tells TRT World, as he ambles to a nearby thick undergrowth. He pluck a stem from a grass and boldly declares: “This is one of the leaves we use in preparing the Odeshi.”

Despite the use of Odeshi, some of the fighters who spoke to TRT World still have reverence for God. “Every morning when we wake we pray before we sing the Ambazonia national anthem,” Nti reveals.

“We even have a pastor in our camp. The government has declared, so we must use everything we have to fight back and save our people from oppression.

The Government of La Republique Du Cameroun has now released a document detailing...

EU officially rules out deal on Brexit by October

Security in Buea has been raised from severe to critical following threats of an...

France and the Ambazonian vigil at Nigerian Embassy in...

For the past three weeks, an encampment of activists from Ambazonia, the English-speaking...

There is a new social media network launched in Egypt, EgyptFace is said to be a...

STATEMENT BY HARMONY BOBGA (ESQ.) FOR US CONGRESS

Good day Sirs and thank you for taking interest in the dire situation in Cameroon...

Sony made a projector helmet to help you understand mosquitoes

Sony made a projector helmet to help you understand mosquitoes